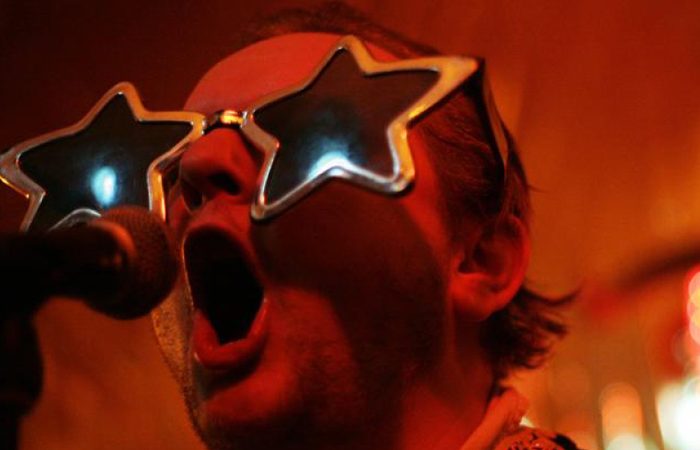 Knarf Rellöm received the renowned Austrian Nestroy Theater Prize in the theater music division, worked as a roadie for the Golden Lemons, was a co-founder of the legendary band “Huah!” In the early eighties, and in his vita he names Mars as his birthplace.

Knarf Rellöm has been involved in various constellations and functions at theater playstation for almost 15 years, including the “Authority for Favorite Songs” and the “Living Jukebox”, and also in the independent theater scene, e.g. at Hajosum and Station 17. There are also theater projects like the Ruhr area musical “Sweatshop” with the secret agency, the Proletenpassion in Vienna or “Mentallica” (Cologne).

Knarf Rellöm is a pseudonym, but not his only one, among other things he also calls himself King Fehler. Reason: “We artists cannot have enough pseudonyms, we are divided personalities.”

To create even more productive confusion, Knarf Rellöm not only stands for the individual artist, but also for a musical collective, a band consisting of Rellöm himself as well as Patricia Wedler aka DJ Patex and Viktor Marek.

This band in turn chooses a new name for each record, such as Knarf Rellöm Ism, Knarf Rellöm Trinity or, most recently, A Tribe Called Knarf.

Musically one moves on new paths between electro punk, disco and numerous other influences.
The appearances are as performative as they are characterized by spontaneous productions, Rellöm and Patex speak live with technicians, colleagues and each other, use costumes and masks or fade in radio play-like sequences. Rellöm on this in an interview: “My concerts are also workshops.”

A sentenc about our work:
Mistake is king

Latest record: A Tribe Called Knarf – “It is the truth, although it never happened”.